An adventure around Asia by bicycle 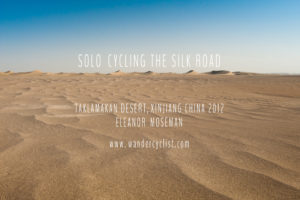 As I plan to return to the region this summer, and by bike, I thought I would put together some old footage of cycling the Silk Road (Southern Route) to Kashgar.

END_OF_DOCUMENT_TOKEN_TO_BE_REPLACED 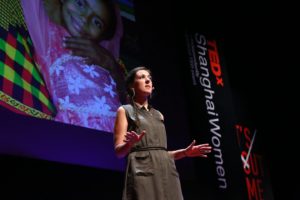 During June of last year I began preparing from one of the scariest events of my life. I was to give a TEDx talk to an estimated audience of 900 people here in Shanghai. Perhaps, someday, I'll write about the experience and how it changed me for life.

END_OF_DOCUMENT_TOKEN_TO_BE_REPLACED 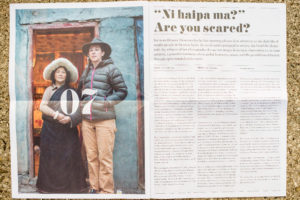 For years Eleanor Moseman has let her inspiring photos draw attention to the daily life of regular people in far away lands. As much anthropological as artistic, the bond she shares with the subjects of her photography elevate her images from mere observation to, in their entirety, a powerful statement about global humanity, peace, and the possibilities inherent through

END_OF_DOCUMENT_TOKEN_TO_BE_REPLACED

Eleanor Moseman began cycling Asia in the Spring of 2010 and completed 15,000 miles through 7 countries in late 2012. She incorporated her photography to document the communities and peoples of the Western borderlands of China, including Tibet, Xinjiang and Central Asia.

Being fluent in Mandarin, Eleanor stands out from the hundreds of cyclists flooding Asia with their starry-eyed stereotypes of Eastern exoticism. She goes slow (26,000km in two years), avoids well-known routes, and takes time to get to know the locals she encounters. These are the people and stories she strives to show the world, sharing the love, compassion, and thoughts of those living in the far reaches of China and its borderlands.

Moseman’s unique experiences include building a mud house in Yunnan with the Yi minority, praying with Kham Tibetans, receiving a sponge bath from Tajik women, spending days picking cotton with Uyghurs, riding a horse during a Buzkashi match in Kyrgyzstan, helping prepare naan in Uzbekistan and witnessing a Shaman ritual in U-Tsang Tibet. This is what bicycle exploration should be like, and Eleanor Moseman is the woman to live and lead by example.

Eleanor was born in the United States and raised in the rural and mountainous region of Virginia. While attending Virginia Commonwealth University, her photography was exhibited in numerous galleries, published in national magazines, purchased for private museum and personal collections.

After graduating with a Bachelor’s of Fine Arts in photography she moved to New York City. Eleanor began working in the arts, such as galleries and assisting artists. Eventually she transitioned from assisting those in the fine arts to world renowned commercial photographers.

An adventurer and published writer, her photography and writing has been published internationally regarding her expeditions and the people she has had the opportunity to spend extended time with. Moseman is also a humanitarian and particularly works with minorities, those within religious cultures, the working-class, and those enslaved into poverty. She strives to take on the roles and lifestyle of the people she documents in attempt to find answers and resolutions to those inflicted while sharing the stories of the unknown, forgotten, and persecuted.

Since late 2008 she has been based primarily in Shanghai, China and establishing herself as a freelance photographer. Her time is divided between commercial work such as architecture and interior photography and pursuing long term, socially conscious and meaningful photo-journalistic projects. Her most recent project was in Bangladesh working with garment laborers, brick workers, entertainers in a traveling circus and a lead smelting foundry. Eleanor plans to continue her work in Bangladesh later this year while pursuing long-term projects in Xinjiang and Tibet that began over 4 years ago.

Eleanor’s professional photography portfolio can be viewed by visiting www.eleanormoseman.com.

HUGE THANKS TO PRIVATE DONORS (INCLUDING KICKSTARTER)

You might be surprised how many miles I can travel on a single dollar. Donations are greatly appreciated and generous support adds content to this site.